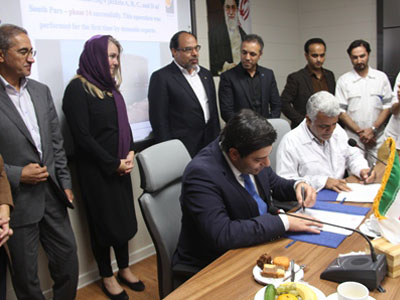 Iran Shipbuilding and Offshore Industries Complex Company (ISOICO) signed an agreement with the Dutch company IHC on building ships and transferring technology. The agreement was signed in the presence of the Dutch Minister of Infrastructure and the Environment.
Referring to the agreement, the managing director of ISOICO said: based on the agreement, ISOICO and IHC will cooperate in the fields of engineering, technology transfer, updating engineering at ISOICO, as well as manufacturing and providing equipment.
Hamid Rezaeian also said that repairing equipment which hold international brands and are not possible to be carried out inside the country and filling out engineering gaps and building engines are the main themes of discussion between the two sides.
He added that the Netherlands is a maritime country and boasts a powerful shipbuilding industry which can help ISOICO upgrade its capabilities. Managers of Damen and IHC companies accompany the minister of environment in this visit. The companies are among the largest shipyard, maintenance, and provision companies in the world, each have so far built up to 2,000 vessels in different classes so that the Hoveyzeh ship was built some 40 years ago by IHC for ISOICO.
He referred to the welcome of European and Asian countries about expanding economic relations with Iran after the implementation of the nuclear deal, especially in the strategic field of shipbuilding, saying: we are inclined to benefit from the Netherlands’ capabilities for building ships, dredgers, tug boats, as well as acquiring related technologies.
The managing director of ISOICO also said that there is a good potentiality for Dutch companies to invest in Iran’s shipbuilding industry, adding that there are also possible grounds for cooperation in the field of technology and production of equipment so that building a ship will create more than 1200 jobs which will expand new markets and contributes to the realization of sustainable development goal.
For her part, Melanie Schultz van Haegen-Maas Geesteranus, the Dutch Minister of Infrastructure and the Environment, said she was impressed by great jobs done by ISOICO and the method of management practiced by the company. She expressed hope that the signed agreement would come into effect. She added that Dutch companies can help ISOICO in the provision of know-how and technology.
The Dutch Minister of Infrastructure and the Environment arrived in Hormozgan on October 25. Representatives and managers of international companies including BAM, Damen, Roterdam port, Royal Boskails Westminster, Royal IHC, STC Greop, Van Oord, and Witteveen+Bos accompanied the minister.
Melanie Schultz van Haegen-Maas Geesteranus traveled to Iran at the invitation of the Iranian energy minister. After holding several meetings in Tehran and visiting senior officials, she visited Bandar Abbas on October 25-26.
Iran Shipbuilding and Offshore Industries Complex Company with 1,100 hectares of land area and 380 hectares of drydock  lies 37 kilometers west of the port city of Bandar Abbas. The company is run under a holding with the aim of designing, building, installing, and repairing kinds of offshore equipment.