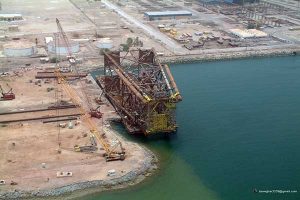 According to Pars Oil and Gas Company (POGC), Hamid Reza Masoudi said early production of sour gas from platform 14A of the phase has started.

Masoudi said sour gas production capacity of 14A platform is 500 million cubic feet per, equivalent to 14.2 million cubic meters, per day, adding that this amount of sour gas is transported through a 32-inch pipeline to onshore processing facilities.

Referring to the launch of the pipeline as well as the transmission line between the U-100 gas pipeline (Phase 14) and the 9th (Phase 12) refinery, he stated: “This pipeline is currently being completed by the project’s client and the Iran Shipbuilding & Offshore Industries Complex (ISOICO), the Iranian Offshore Engineering and Construction Company (IOEC), and the Industrial Development & Renovation Organization of Iran (IDRO), the consortium’s leader.”

South Pars Phase 14 development project is being implemented by the employer POGC with the goal of producing 56.5 million cubic meters of sour gas per day and 75,000 b/d of gas condensate.

The annual production of more than one million liquefied petroleum gas, one million tons of ethanol consumed by petrochemical units, and daily production of 400 tons of sulfur are also targeted by developing the project.